The Taiji diagram is one of the most popular and best-recognized emblems in the world. It is the symbol of Taoism and is broadly used in Qigong, martial arts, Chinese medicine, astrology, and fortune-telling. The Korean and Mongolian national flags both include this diagram, and it has been used in many other places.

This diagram is widely used because it embodies great energy and deep layers of meaning. There are many theories about its origin. But how it came to be really isn’t so important. What is important is its structure: a circle divided by an S-curve into two fish-like parts of opposite colors, with a smaller circle of the opposite color in each of the fish-like parts. Over a long period of contemplation and interpretation, it has become one of the most complete summaries of the Taiji philosophy.

First, it is circular, not square or any other form. The circle is the characteristic of the universe: stars and planets tend to be round, and all their movements are circular. In a circle, there is no beginning and no end. Any point can be the beginning or end. This contrasts with the human’s linear thinking, which there is a beginning and an ending. There is a cause and effect.

Human beings are also part of nature. Then why do they tend to be linear in thinking? Cause and effect are different in sequence.

Is this because human beings have limited lifespans, limited vision, and limited thinking? If you take a small section of a large circle, it’s close to a straight line. Thus it reflects human’s linear thinking.

Second, the reverse S-curve divides the diagram into two fishlike shapes, one black and one white. These represent Yin (black) and Yang (white). The universe, the Taiji, consists of these two aspects.

Why then an S-curve rather than a straight line? In the first place, the curved line is a manifestation of dynamic change – important, because the universe is always in flux. Also, if we draw a diameter through the diagram, no matter how we slice it, there is not half that won’t contain both Yin and Yang. This is emblematic of the way that every part of the universe contains both Yin and Yang. Furthermore, an s-curve is longer than a straight line: it creates a more intimate relationship between Yin and Yang.

Third, there is a black circle in the white fish, and a white spot in the black fish. This means that there is always Yin in Yang, and Yang in Yin. This is the basis of transformation. Otherwise, Yang would always be Yang, and Yin would always be Yin: there would be no basis for their transformation. This is also how it is in the universe. No matter how holy someone is, he will always contain a seed of evil; no matter how evil a person is, he will always contain a seed of the Divine.

Fourth, in the Taiji diagram, the white fish is on the top, and the black fish is on the bottom; this indicates that Yang is above Yin. Also, Yang moves to the left, and Yin moves to the right, going clockwise. (Here we are speaking from the point of view of the diagram itself, rather than from the point of view of someone looking at the diagram.)

Moving clockwise is Yang. This depicts the development the universe from Wuji to Taiji, from Taiji to Yin-Yang.

This diagram summarizes the whole Taiji theory: that Yin and Yang coexist, are interdependent, restrict each other, enhance each other, and transform into each other.

People often think that Taiji diagram is a circle divided by one white and one black fish like shape. Often it is randomly drawn without a clear understanding of their relative position. Actually, there are four possible ways to draw the diagram. 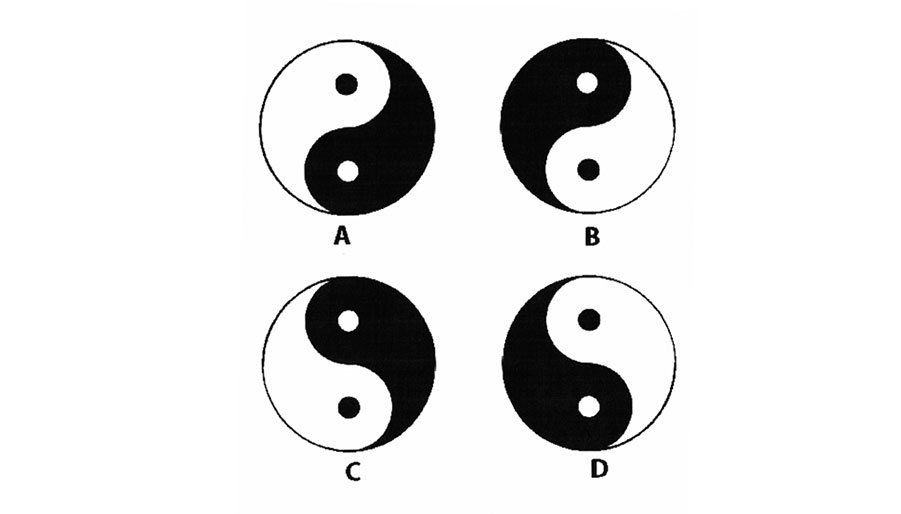 Only Diagram A is correct; B, C, and D are incorrect. If one draws the diagram at random, there’s a 75 percent chance it will be wrong.

It’s easy to remember how it should be: white on top, black on the bottom, and turning clockwise. So don’t get it wrong!