The FBI’s war against Apple’s strong iPhone encryption has recently been much discussed in the United States. The FBI ruled that Apple must help to see what’s on an iPhone that belonged to one of the shooters involved in the mass killings in San Bernadino, California.

The FBI wants Apple to create software that can defeat the encryption of the phone. Apply wants to avoid creating such a tool, arguing that, once it exists, it will threaten the security of all iPhone users.

The two sides are embroiled in a conflict that will have repercussions in the future on the way Internet companies handle encrypted communications, and on legislation to regulate encrypted devices and services.

Public opinion is divided. Some say the FBI is right while others side with Apple. The FBI is right to want access to information that might help with a high-profile investigation of suspects linked to terrorist organizations. Apple is also right to defend its security and to argue that weakening encryption is not the way to go.

Whatever intellectual merit the arguments may have, from the point of view of the underlying natural laws, the FBI, in other words the government, will eventually have the upper hand, and Apple will have to yield or find a way to compromise.

At its highest level, natural law is described by two theories: Yin-Yang Theory and Five Element Theory.  Natural law is the highest governing principle in the universe; whether or not we are aware of it, we are “controlled” by the patterns of natural law. 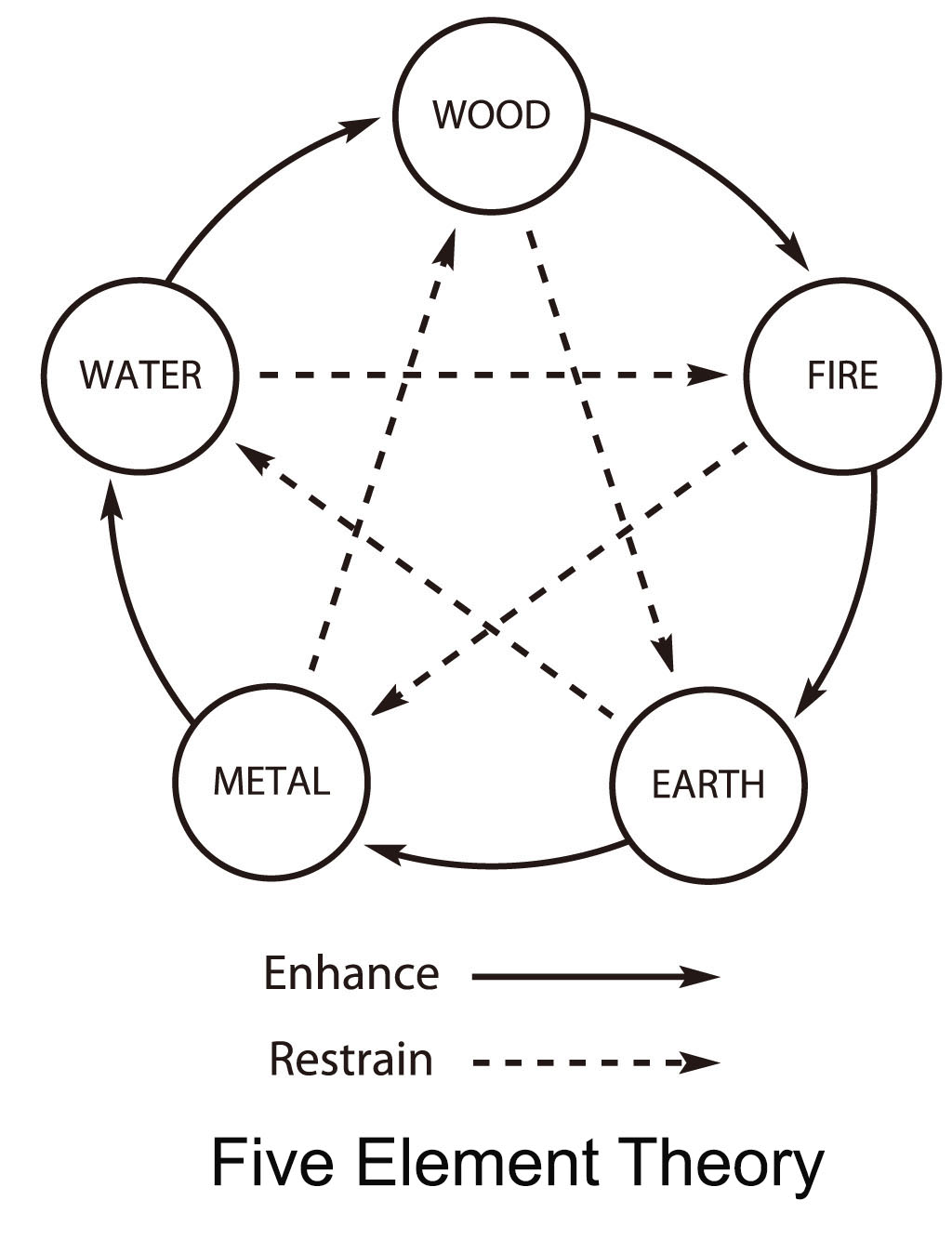 Everything in the universe is always changing, is involved in unceasing transformation. The patterns of change follow the Five Element Theory. The theory use the material substances of metal, wood, water, fire and earth as metaphors for the different processes of change. These fundamental modes of change are illustrated in the diagram. In other words, these physical substances are not just used for their physical properties, but represent all possible modes of change and transformation.

The theory has a built-in structure by which the different modes of change enhance and restrain each other, in the process of seeking equilibrium, as described in Yin-Yang Theory. This means that each element relates to the others both to nourish and be nourished, to restrain and be restrained.

Because all manifestation is change, all events and situations can be analyzed in terms of the Five Element Theory –  to everything social, educational, or political, from war to resolving conflict, and from developing a business to creating systems.  And it also applies to the conflict between Apple and the FBI.

Apple, and all internet companies associated with intellectual work, such as Microsoft or Google, belong to the Water element.  Water is related to intelligence, flexibility, change, and flow.

The FBI, as an agency of the government, is characterized by its exercise of power to support and control. It belongs to the Earth element. According to the Five-element diagram, Earth controls (restrains) Water. This is true for all internet companies: when they come up against governments, it is always a matter of the relationship between Water and Earth.

This has already played out in many familiar cases.  We can see this in Microsoft’s 2001 antitrust encounter with the US government and in its recent $732 million fine by the EU commission. Similarly, Google has had problems with the Chinese government, and it has recently lost its appeal in a Russian anti-monopoly case.  These are all examples of the normal cycle of Earth restraining Water.

In nature though, sometimes there are abnormal cycles, such as Reverse Restraint and Over Restraint. In Reverse Restraint, instead of Earth restraining Water, it is Water that restrains Earth –when water overwhelms the earth, it creates a flood. . The Over Restraint occurs when Earth makes water disappear, or limit its flow. When this happens, Water will not nourish Wood which is the element that represents growth.  When Wood is weak, the economical growth of the country slows down.

Right or wrong, logical or irrational, this is how the energy of change in the universe proceeds.

Thus, in the conflict between Apple and the FBI acting on behalf of the government, the outcome is very clear.  According to the normal cycle, Apple will ultimately be controlled by the FBI, the government, and the courts.

It’s important to prevent control that leads to an over-controlled situation. When Water is over-controlled, it cannot nourish the Wood element, or economic growth.  Thus, when the government exercises its power, it has to be careful. If not, economical problems could arise from uncompromising over-control.

2 thoughts on “Apple, the FBI, and the Five Element Theory”