The two pillars of Feng Shui theory are natural law and chi monism. In Chinese, there are many terms that involve chi, like “chi si” (complexion), “chi li” (strength), “chi po” (spirits), and so on. In other words, the concept of chi is deeply embedded in the Chinese mind.

But what is chi? It cannot be touched, seen, or measured. Everyone seems to know it, but no one can put a finger on it.

One issue is that the single character “chi” often refers to different meanings. It depends on the context. However, it’s not always clear what context it’s referring to! So, for the long history in China, there has been quite a bit of confusion about the subject.

In Chinese metaphysics, chi is defined as the essence that constitutes the universe.

In Chinese medicine, inner alchemy, or qigong, “chi” represents a kind of energy. But the terms “chi spirit” and “chi capacity” also refer to states of mind or consciousness. In other words, in different fields the same term can refer to different things.

The issue is that chi as the essence of the universe actually manifests in different ways in different situations. The aspect people talk about most is the energy aspect. But if we define chi as the very essence that constitutes the universe, then any and every object is made out of Chi. So we need to clarify that, fundamentally, Chi has three aspects: a material aspect, an energy aspect, and an information or consciousness aspect.

In my book, Form Defines Energy, I use the following diagram to clarify that relationship. 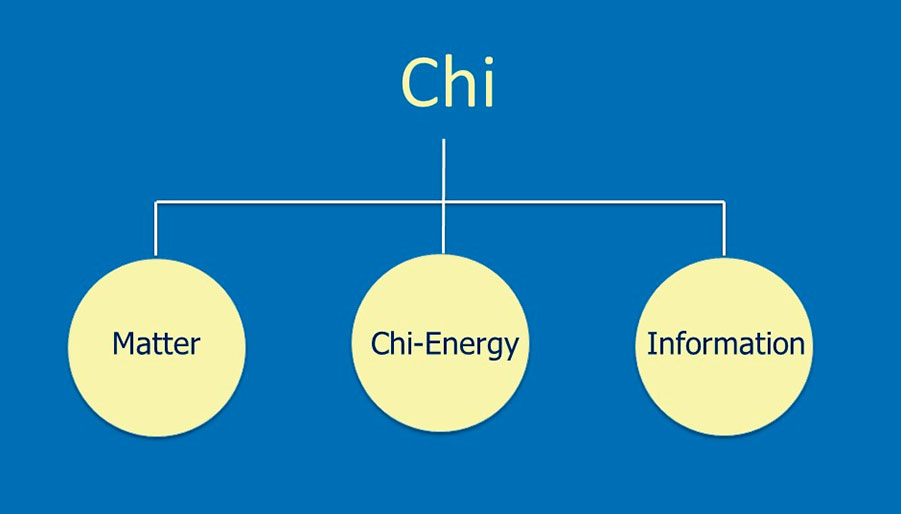 The three aspects – matter, energy, and information – are inseparable. They always exist together.

This is easiest to understand if we look at a living person. In a human body, the flesh and bones are the material aspect. Metabolism that sustains life is the energy aspect. Sprits, emotions, and consciousness – those are the information aspect.

From the point of view of classical Taoist philosophy, everything is alive; even a piece of rock or a woven basket. Therefore everything has all three aspects: matter, Chi-energy, and information. This is actually consistent with the view of modern physics. The only difference is that, in physics, these three aspects are said to be manifesting on different frequencies.

In Western science, people try to analyze things into their smallest components. This has led to a kind of dualism that separates matter and spirit. In ancient China, however, people regarded Chi as the finest form of manifestation, out of which everything else was composed – another way of describing Chi monism.

Maybe someday science will also realize that there is a fundamental substance that unifies all phenomena.