In earlier postings, we’ve said that Natural Law was one of the main pillars of Feng Shui. Natural Law consists of the Yin-Yang theory and Five Element theory.

Even though the Five Element theory is concerned with dynamic transformation, the mechanisms of change, it is still associated with specific things: colors, forms, seasons, and so on. And Feng Shui is basically about form.

The Five Element theory describes the relationship between the features of the elements and the shapes. This is summarized in the diagram below. 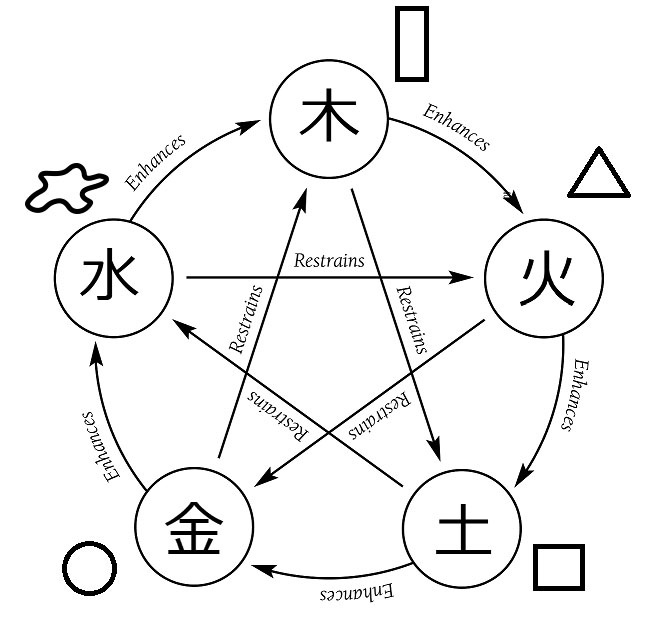 In structures or buildings, they are the combination of different forms. If the forms used are compatible following the Five Element Theory, they will enhance each other, and the building will look and be harmonious. Otherwise, it will not be so beautiful.

For example, in a traditional mosque, the basic structure is square, with a round or circular dome above. The square is the Earth element; the round dome is the Metal element. As we can see from the diagram, Earth creates Metal, so the configuration is harmonious. This is why mosques built in this form always create a sense of beauty.

On the other hand, if the top of a building is a long and tall structure, which pertains to Wood, the building would not be so harmonious, because Wood conquers Earth. The conflict would give rise to an uneasy feeling.

Many Catholic churches have a Gothic design, with pointed roofs. They are tall, and thus belong to Wood; the top shape is triangular, thus Fire. Wood gives rise to fire, so the combination is harmonious. These buildings have lasting beauty that outlives fashions in architecture.

Many “new age” interior designers try to apply Five Element theory to Feng Shui design. They try to make sure that all five elements, Wood, Fire, Metal, Water, Earth. are included in any design scheme: green, red, black, gold or yellow, and white. They think that this is a good use of Five Element theory – but it shows that they do not understand what Five Element theory really is, or how it should be used.

The urge to include all five elements together does not come from any traditional Feng Shui approach, or even from the newer Black Hat school. It is purely an invention of western new age Feng Shui practitioners – one that shows they do not really understand how Five Element theory is used.

A year has four seasons – but no one time has all four!

To say that, is similar to saying a good soup should have all five tastes at once: Sour, salty, spicy, sweet and bitter. There is no such soup with all five of these flavors that is delicious. This shows how far people without any understanding of the Five Element theory to create a new school of feng shui are willing to stretch ideas in the name of feng shui.