Around the midpoint of my life, I found myself wondering whether I was on the right path. I considered whether I should change careers and set out on a new course. Around this time, I received a call from an old friend of mine in China who was a Taoist qigong healer. This friend told me that he had returned to the island where he was born, and he invited me to visit whenever I happened to be in China.

Since I needed a change of pace and was curious about the small fishing village where he had grown up, I decide to make a special trip to visit him.

He lived on an island about 100 miles off the shore of Shanghai, which was only accessible by privately run fishing boats. Once there, I stayed with my friend in his simple wooden house. In the morning we would practice qigong together and stroll on the beach talking. In the afternoon he would sometimes lead me to a small outcropping of rocks where we could catch yellowfish for dinner.

We spent our time drinking tea, talking, listening to music, and meditating. I enjoyed feeling the gentle sea breezes, watching the sunrise from the green hill, and seeing the moon rise over the horizon. The only sounds we heard were the ocean waves and the calls of seagulls. After a couple of weeks, I felt so relaxed that I could almost sense my body rippling with the ocean waves and rising with the seagulls in flight. I found myself envying my friend and his simple life.

One evening, my friend was making tea, a routine after dinner. I noticed the brew was light pale green, as usual. I was expecting it would be either the Long Jing or Bi Lo Chun that he had been serving me since I had arrived.

Yet when I tasted the tea, it didn’t taste like either Long Jing or Bi Lo Chun. It had a special citrus floral scent and was very sweet, without any of the grassy flavor we expect from a green tea. It was somewhat familiar but I could not put my finger on it.

“What tea is this?” I asked in amazement.

“How could it be made so light, yet taste so sweet and alive?” I asked. Even though Da Yu Ling is one of the best Taiwan high mountain oolongs, I never knew it could be made so light yet still have such a depth of scent and taste. I usually made it much stronger.

My friend looked at me and smiled, but said nothing. 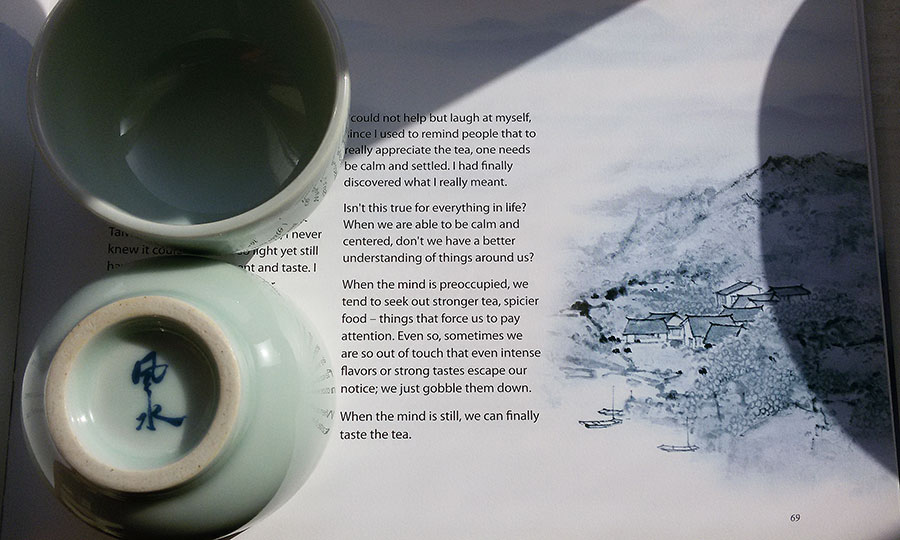 I gradually realized that I had relaxed so much during my stay that my mind had become very calm and centered. I was able to appreciate the tea at a much deeper level.

I could not help but laugh at myself, since I used to remind people that to really appreciate the tea, one needs be calm and settled. I had finally discovered what I really meant.

Isn’t this true for everything in life? When we are able to be calm and centered, don’t we have a better understanding of things around us?

When the mind is preoccupied, we tend to seek out stronger tea, spicier food – things that force us to pay attention. Even so, sometimes we are so out of touch that even intense flavors or strong tastes escape our notice; we just gobble them down.

When the mind is still, we can finally taste the tea.

2 thoughts on “At One with Tea”