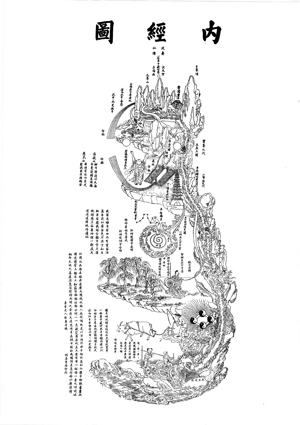 This diagram (the name is sometimes written “Inner Channel Diagram”,  is a reproduction of one of the most sacred treasures of the esoteric Taoist Internal Alchemy lineage of ancient China.

It depicts the human energy body, which is the basis for traditional spiritual cultivation, and subtly maps the secrets of human energy development. Using the symbolism of natural scenery and the poetry of the Taoist immortal, Lu Dong Bin, this image delicately records and preserves a wealth of understanding about human energy cultivation and immortality.

According to records, this diagram, which first appeared during the Yuan dynasty (1271-1368), had a significant impact on the Chinese Taoist culture for the next several hundred years. Over the centuries, it has been well guarded, retained in the private custody of the innermost lineage holders of the Longmen School of Internal Alchemy.

In recent years, documents have revealed that a color painting of the diagram once existed in the collection of one of the Emperors of the Qing dynasty (1644-1911). As an etching in stone, the Nei Jing Tu exists today in two places in the world: the White Cloud Temple in Beijing, and Wu Dang Mountain in Hubei Province.

This diagram not only summarizes the secrets of the ancient art of Internal Alchemy, but it establishes a link with the energies of the living tradition of Taoist Alchemy.

Frame and hang it in living room or Altar brings will connect this universal energy and information to your life.